A King in Marna (The Song of The Bitter Earth, #1) Siran A. McKenzie 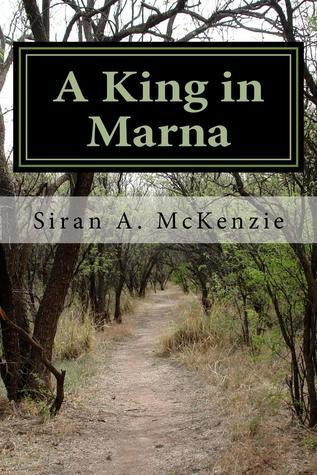 As she prepares to leave, she stumbles across what might be an ancient and long forgotten prophecy. It is disturbing to her, and she vows to investigate it further after her mission is completed, for nothing is more important than stopping the streets of Marna, capital of Marnathia, from running red in blood. Unfortunately for Terah, dark forces are already arrayed against her and her Sisterhood, seeking their destruction as revenge against her goddess who was pivotal in sealing their master away, with the aid of the other gods. On the way to Marna the embassy is attacked by foul creatures, and cursed of all ill luck, a Sorcerer of old!

On the plains, Corith son of Durgos of the Golden Eagle Tribe comes to the age of manhood. His destiny is set. When his father dies, he will be chief. Yet Corith is plagued with dark dreams and visions that haunt him. He seeks the council of the shaman, and her interpretation of the dreams is worse than the dreams themselves. In the town of Zerash eleven year old Deren is a happy boy, living with his father, mother, and sister in a modest home in a good neighborhood.

Tragedy strikes his family, leaving his father and mother dead. Coming into the possession of what he believes to be an ordinary dagger, his life goes from bad to worse. Deren is abducted by Black Isler slavers and taken across the seas to the mysterious Black Isles. There he will carve out a life as a very powerful warrior-slave serving a prince of that land. Yet prophecy and fate has another destiny in mind for him, for he is a weapon that could cut either way, and he becomes a Shadow of his former self.

As the future in Marnathia looks uncertain, the other kingdoms on the continent jostle in anticipation, some with bated breath in celebratory glee, and others in uncertainty and doubt. The King in Marna always served to unite the others together against common foes, and without the head, alliances will crumble, and shift. For other kingdoms savor the role Marnathia has played, seeing themselves as the true head. Crowning a King in Marna would stop blood from flowing on the streets, and it would also help those who wish the False One to be defeated stand a fighting chance.

The right king could accomplish this- the wrong king will open the gates of hell. The task before Terah is graver than she even thought, and her decision will affect more than one nation. All the while, the dark threads of the Sorcerer is being woven through every nation, every land, and in the very heart of Neral itself!

Comments
Comments for "A King in Marna (The Song of The Bitter Earth, #1)":